The difference between UV Chamber and Xenon Chamber

Coatings, plastics and other organic materials are exposed under natural climatic conditions and light radiation over a period of time there will be loss of light, faded, yellowed, peeling, cracking, loss of tensile strength and the whole layer off and so on. Even indoor light or also as a pigment or dye to such material damage through the glazing sun. Thus for paint for outdoor use, such as building exterior coatings and automotive coatings, weather resistance and light resistance are the most important test items. Now there are many paint weathering resistance and light resistance test method. While natural weathering test, a xenon arc lamp, a carbon arc lamp or light, ultraviolet light irradiation, etc. artificial accelerated weathering tests commonly used method . While the most common test equipment it’s  UV  Accelerated Weathering Tester and Xenon Weathering Accelerated Aging Chamber, while these two equipment both simulated the Sunlight and have similar function but it did different from each other. Today we are going to discuss the difference between two equipment and how to choose right one according to your test standard. UV mainly used to simulate the solar light in the ultraviolet part of the spectrum , by simulate the ultraviolet radiation and condensation in the natural sunlight to carry out the accelerated weathering tests on the materials. Fluorescent UV lamps similar to the common cold fluorescent lighting electrically principle, but it can generate more ultraviolet light rather than visible or infrared light. 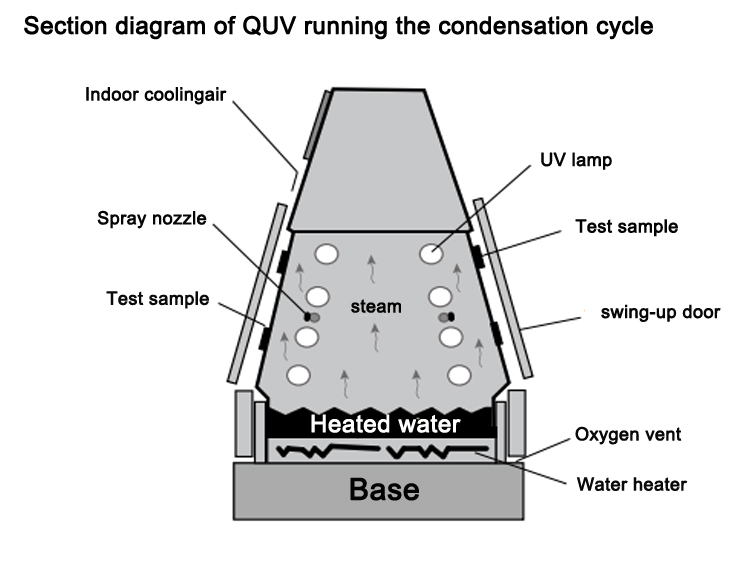 For different exposure applications, there are different types with different spectra of light available. UVA-340-type lamps to simulate sunlight well in the major short-wavelength ultraviolet spectral range. UVA-340 lamp spectral power distribution (SPD) and the solar spectrum from 360nm to dispose of the spectrum is very similar. Artificial climate accelerated UV-B lamps are also commonly used lamp aging test. Than UV-A lamps for material damage to speed faster, but shorter than 360nm wavelength energy output of many materials can cause the actual results deviate.

Fluorescent UV lamps due to their own inherent spectral stability make irradiance control simplified. All light sources are aging with time becoming weaker. However, other types of fluorescent lamps is different from its spectral energy distribution does not change with time. This feature improves the reproducibility of the test results, which is a big advantage.
A trial showed that using a 2h lights and a lamp in use 5600h aging test system equipped with irradiance control of the output power of no significant difference between the control device irradiance light intensity can be maintained constant. In addition, the spectral distribution of the energy they also show no change with a xenon arc lamp that is very different.

Xenon arc mainly through all analog spectrum (full spectrum) to reproduce the existence of different environments destructive waves, can provide the appropriate environment for simulation and accelerated testing of scientific research, product development and quality control. These two methods are based on entirely different principles. Xenon lamp irradiation chamber reproduced in whole solar spectrum, including ultraviolet, visible and infrared light, which is the object of the simulated sunlight. The UV aging test does not attempt to imitate the sun's rays, but just imitate destructive effect of sunlight. It is based on long-term outdoor durability of materials exposed by short-wave ultraviolet radiation damage caused by the aging of the maximum principle.